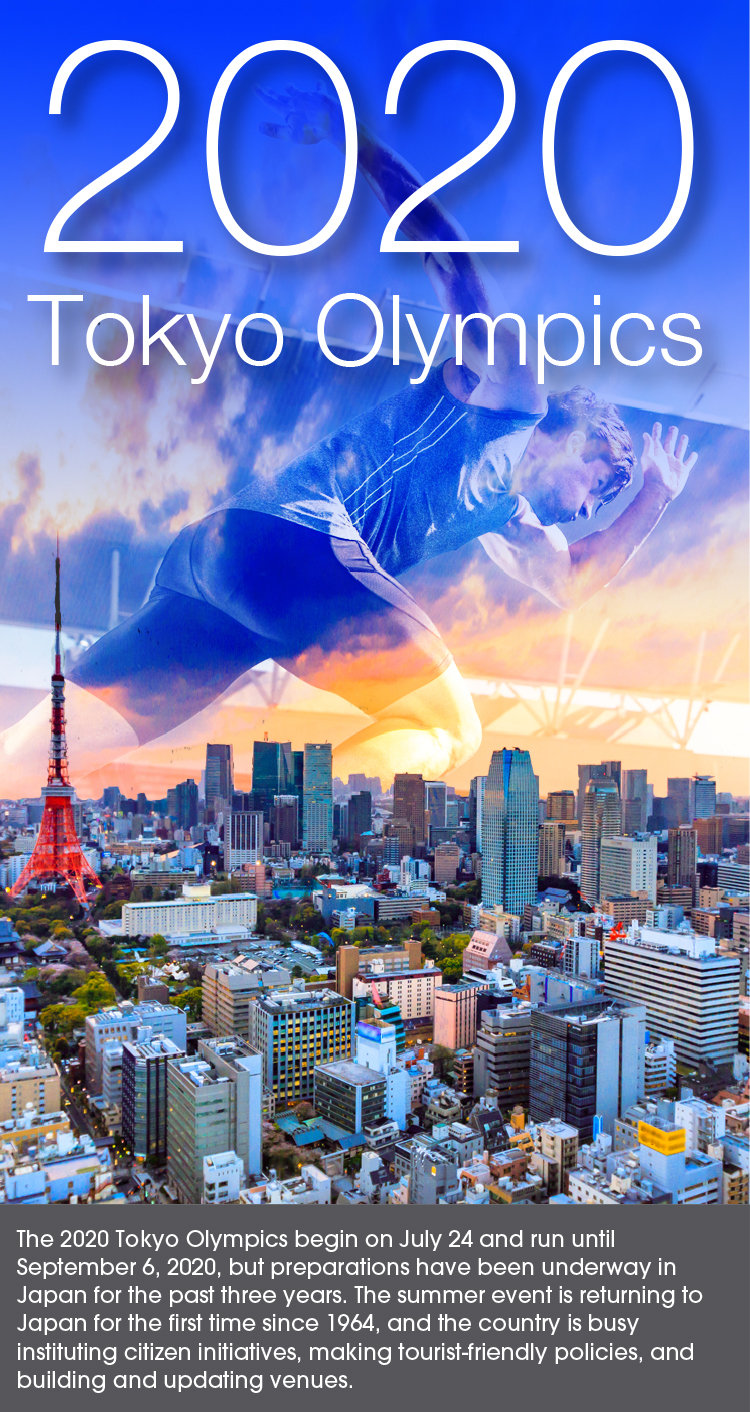 Citizen Initiatives
Both citizens and companies are brushing up on their English. Although many Japanese speak English, the educational system is increasing its offerings to allow people to volunteer and have better interactions with visitors.

While Japan has efficient public transportation, with the Shinjuku Station in Tokyo serving over a million commuters daily, the Olympics will put demands on the system, making it necessary to adjust the train schedule. At the same time, road construction is underway, particularly on roads leading to popular tourist destinations that currently don’t accommodate heavy traffic.

A new railway is planned to link the Haneda airport and the Tokyo Station to cut the travel time from 30 minutes to 18 minutes. Also, from Narita Airport, it will take only 36 minutes instead of almost an hour.

To ease the traffic congestion and the rush hours, the government is proposing July 24, 2020 as a ‘day of telework’ to give employees the option to work remotely. According to the Japan Times, “The Internal Affairs and Communications Ministry is hoping that about 1,000 companies will take part in the project, which is also designed to promote a change in people’s work style.”

Tourist-Friendly Policies
Cultural heritage site renovation is underway. Because Japan experiences the recurrence of natural climate events such as heavy rains, earthquakes, and tsunamis, updating these sites is done on a more or less regular basis. But with the Olympics looming, attractions such as the Himeji Castle, the Hiroshima Peace Museum, and Tosho Gu, for example, are undergoing serious renovation to be completed in late 2019 or 2020.

Smaller local airports will be enlarged to handle the more than 13 million tourists expected for the 2020 games—that’s in addition to the 27 million tourists who visited Japan last year. Japan is already revamping its customs and immigration infrastructure to meet the increased demand.

But more than that, there is an expansion of exhibition facilities that will have staying power in the years ahead.

Japan is making every effort to ensure that the 2020 Tokyo Olympics are accessible to everyone and uniquely representative of the culture. As you can tell from all the preparations underway, it isn’t too soon to make your own plans. All of us at Idea International will be happy to help you. Contact us now!