Macau, A Unique City and a Growing Trade Show Destination in China

Macau, officially the Macau Special Administrative Region of the People’s Republic of China, is an autonomous region on the south coast of China, across the Pearl River Delta from Hong Kong. A Portuguese territory until 1999, Macau features a mix of cultural influences. Nicknamed “the Las Vegas of Asia,” Macau is home to giant casinos, malls, and hotels with the same name as those in Las Vegas—like the Venetian, the Hardrock, and the Rio. One of Macau’s more striking landmarks is the tall Macau Tower, with sweeping city views.

Macau is accessible via air. Macau International Airport is located on Taipa Island, a ten-minute drive via the Macau-Taipa Bridge. About 20 airlines flying to and from Macau operate at the airport connecting from major cities in Mainland China, Taiwan, Korea, and other countries in South-East Asia. Macau is connected by sea from Hong Kong and Mainland China through a network of ferry terminals virtually operating 24 hours a day by several service providers. Ferries from Hong Kong’s Macau Ferry Terminal in Sheung Wan operate every 15-30 minutes by day and every hour at night, and the ferry ride takes about 60 minutes. 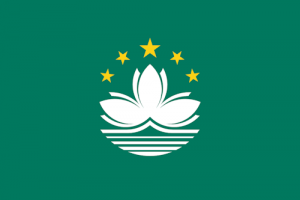 Macau has a fascinating history that explains its unique culture. The city of Macau was formerly a colony of the Portuguese Empire. Between 1557 and 1887, Macau was governed by the Portuguese under Chinese authority and sovereignty. In 1887, Portugal was given perpetual colonial rights for Macau, which remained under Portuguese rule until 1999, when it was transferred to China. As a special administrative region, Macau maintains separate governing and economic systems from that of mainland China.

A Unique City and a Growing Trade Show Destination.

In addition to gambling, visitors to Macau have options ranging from visiting the Ruins of St. Paul, built in the 16th century, to taking advantage of the highest commercial bungee jump in the world. Situated at the top of the striking Macau Tower, jumpers leap from a platform 233m (764 ft) above the ground and experience the ultimate free-fall experience. The Macau Tower offers less terrifying alternatives such as Skywalk and SkyJump activities.

The saying, “You haven’t been to Macau until you’ve been to Senado Square,” is true since it reflects the city’s unique heritage, a blend of Asian and Portuguese influences. For additional cultural immersion, visit  Taipi Village, a short walk from the casino (Cotai) strip. You will find museums and colonial churches juxtaposed against Chinese temples. Taipa Village is home to the stunning Taipa House Museum. Built in 1921, it once served as a residence for the Portuguese governor and other high-level civil servants and their families. Taipa Village is one of the few areas in Macau where you can step back in time and enjoy quiet strolls along pedestrian alleys and hidden lanes, browse in cozy shops, and visit local bakeries selling the city’s famous almond cookies and peanut candies.

Macau Venues: The Similarities with Las Vegas Are Not Simply About Gambling

Like Las Vegas, Macau has invested in exhibition venues with state-of-the-art technology. Not to be outdone by Las Vegas, the Venetian in Macau has 150,000 sq. meters of exhibition space and is a very popular exhibition venue with most major shows locating there. An exciting venue coming in 2021 is the Galaxy International Convention Center. Visitors will be able to reach the GICC by light-rail train. There is currently a hotel on the site, but the exhibition center will be the crown jewel of the project, able to accommodate 7,000 delegates.

While the exhibition industry is growing in Macau, due in large part to the gaming culture and the moderate weather, the UFI Global Exhibition Barometer reports that global economic developments are the most critical business issue in Macau. On the other hand, since all initiatives in Macau are relatively new, the venues are in the forefront to offer contemporary technology such as digital services.

At this point, the Venetian is the first choice of large show organizers. The Venetian will play host to 20,000-50,000 attendees and more than 500 exhibitors at the Global Gaming Expo Asia (G2E Asia) a must-attend marketplace for the Asian gaming-entertainment industry, offering a one-stop platform to the industry professionals to network, forge fresh connections, source new products and solutions, and gain a more in-depth insight into the latest global industry trends.

The Venetian will also be the venue for the International Association of Amusement Parks and Attractions Expo Asia (IAAPA) is the one-stop destination for leisure and attractions industry professionals, including operators, suppliers, investors, and developers. It focuses on amusement and theme parks, integrated hotels and resorts, water parks, attractions, family entertainment centers, and similar companies. The show organizers expect 7,000 attendees who will visit 300+ exhibits.

The Macau International Environment Cooperation Forum & Exhibition, with approximately 20,000 will also have a home at the Venetian.

Most of the stands at exhibitions in Macau are built in China and driven to Macau. Exhibiting in Macau can be tricky and time-consuming. It’s critical to lock in labor early and not to be surprised by the cost of labor. Because of the labor laws, as we explain below, a project manager should be on site to instruct local labor. This obviously increases the cost, and the time it takes to set up a booth.

Read the manual! And fill in all the appropriate forms for services such as rigging.

The Labor Environment—and the Laws (If the following sounds confusing, consider working with a partner like Idea International. We understand this environment!)

Macau’s has its own immigration laws which affect labor including labor for trade shows and exhibitions. The Government of the Macau Special Administrative Region allows citizens of specific countries/territories to travel to Macau for tourism or business purposes for periods ranging from 14 to 180 days without having to obtain a visa. All travelers between Macau and China and Hong Kong must pass border controls, regardless of nationality. Chinese citizens resident in mainland China do not have the right of abode in Macau and are subject to immigration controls.

The following labor contracts must be in writing:

A written labor contract must contain:

Each party shall have a copy of the written labor contract. Only after a non-resident employee has been granted the “Authorization to Stay for Non-resident Workers” issued by the Public Security Police Force can he/she legally work in Macau.  Moreover, he/she could only work according to the position stated in the “Non-resident Worker’s Identification Card,” or as it is popularly known, “the blue card.”

Finally, the Language in Macau; Be Prepared